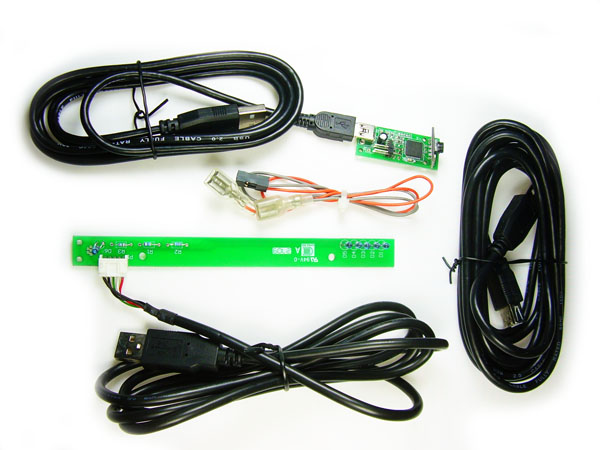 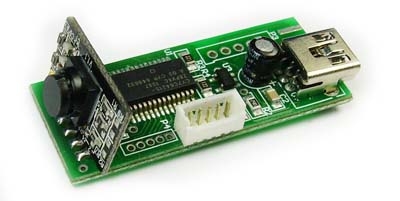 The Ultimarc AimTrak Light Gun Module is a tiny PCB containing a camera and tracking logic which can be mounted inside any available gaming gun body including arcade guns and console guns such as Guncon. Some DIY assembly and creativity is needed for the PCB mounting.

The gun trigger switch is wired to a connector on the PCB.

A small LED PCB is mounted at the top of the monitor screen. This can be behind a glass panel if necessary. 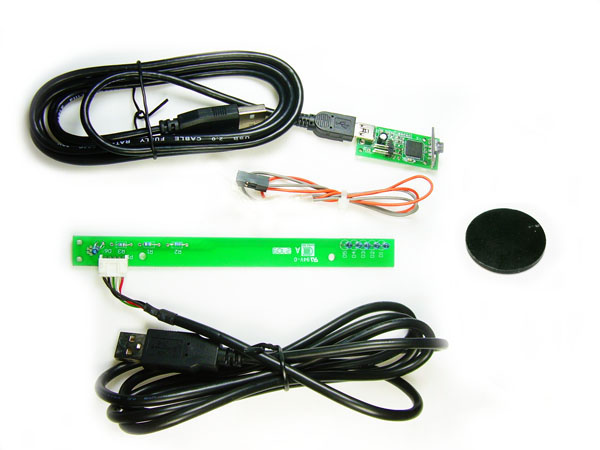 The PCB needs to be installed in the nose of the gun. To do this, the existing gun electronics must be stripped out, but retain the trigger switch.

Some console guns have other buttons which can also be connected.

The PCB should be installed so that the field of view (approx 30 degrees) of the sensor is not obstructed by the nose of the gun. Most gaming guns were originally designed to be used with CRTs and so have a large lens in the nose. This should be removed. This leaves an aperture which should be large enough for the new PCB and sensor.

The top of the gun aperture is the most likely to block the sensors view as the sensor is angled upwards (its also slightly angled to the left), so if necessary, lower the PCB down slightly to clear the top of the nose.

The PCB needs to be approximately straight in line with the center-line of the gun. Any error will be corrected in calibration but will reduce the useable range of the gun.

It will usually be necessary to trim some of the internal plastic structure of the nose of the gun, which can be done with a knife or cutters.

We have found that material such as "Blu-Tack" gives a much better result than might be imagined when used for mounting the PCB. This is non-conductive. Other methods might be adhesive foam ("Sticky Fixers")or foam sealing strip. There are also mounting holes in the PCB for"proper" mounting using brackets/screws, but none are supplied owing to different gun internal shapes.

The picture below shows a "cut-away" view of the sensor PCB mounted inside a gun. 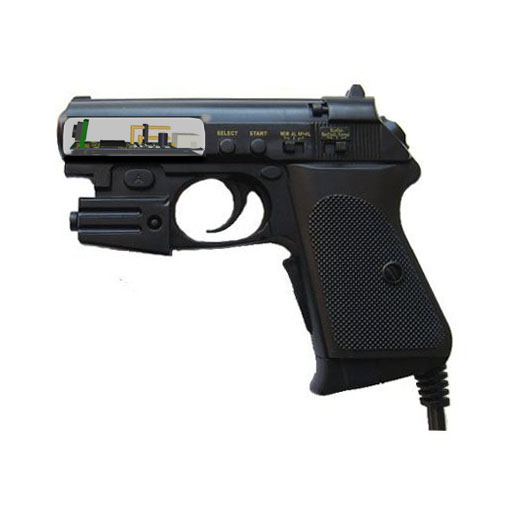 The gun trigger should be wired to the white connector. A housing is supplied, with pre-crimped wires for trigger, two buttons and ground.The pinout is shown below. The trigger switch is connected to the TRIGGER and GND pins.

If you wish, other gun-mounted controls can be connected to the button harness as shown below. These buttons are numbered P1, P2 etc up to P5.The COM connection of all buttons should be connected to the GND pin on the trigger harness. Note on the current version the second 5-pin connector location has no connector fitted although the connections are functional. 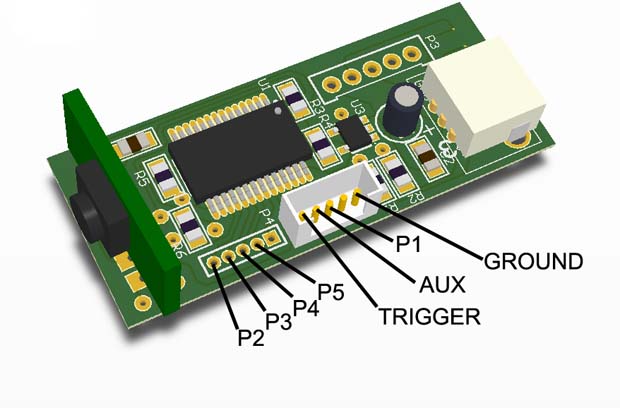 The USB cable should be connected and routed through the gun including existing strain-relief methods, which usually include snaking through a number of retention pillars.

The LED PCB can be mounted flat on the top of a monitor, or vertically on a cabinet monitor surround, or at other angles.

After mounting, the 6 LEDs should be carefully bent so thay are approximately aimed at the gun when the gun is held in the rough position of operation. 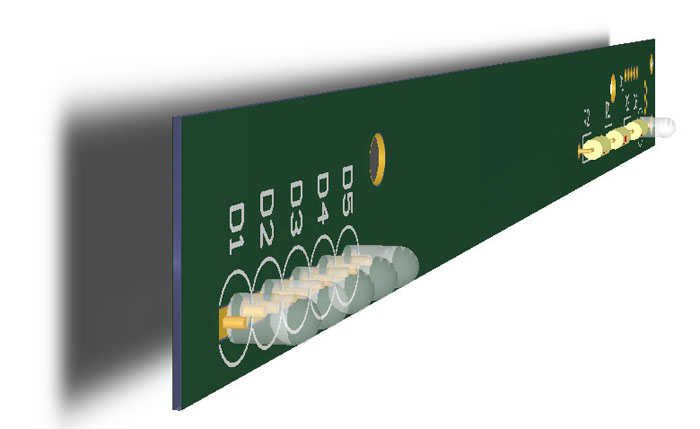 The PCB should be mounted centrally on the monitor, and as close to the top of the monitor screen as possible. It must be connected to a USB port and this port must be either on a good quality powered hub or on the PC motherboard since the current draw is relatively high.

The picture below shows the relationship between the LEDs, bent downwards, and the gun. 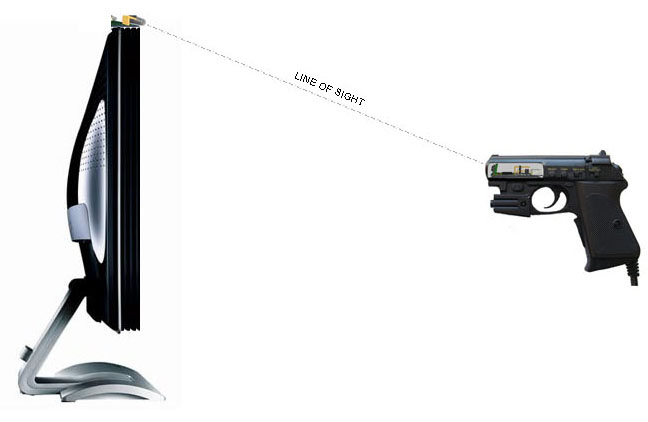 The gun must be held vertically during this process otherwise it will fail.

Players which are very different heights will not easily be able toshare a gun.

If any of the above steps fails, the cursor will continue to point at the required location and not advance to the next stage. If this continues to be the case you might need to install the Config software to diagnose the problem.

The most likely cause of failure to calibrate would be:

Note that as calibration is performed at the corners, this is the most critical area regarding sensor detection.

In your game software, the game must be configured to use the mouse pointer as a gun. 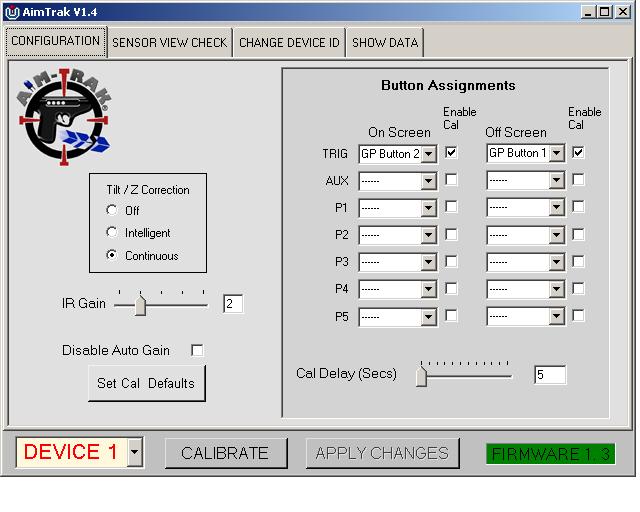 This utility is not required for normal operation or for calibration. It is used for initial configuration (unless the defaults are used) and for troubleshooting.

Note the software requires the Microsoft .NET runtime to be installed on the PC.

Assigning ID.If you are connecting more than one gun to a PC, each one must have a unique ID.The ID is assigned by clicking on the "Assign ID" tab.

Sensor View Check. Clicking on this tab displays the Infra-Red LED as seen by the gun sensor.

Configure Controls: The trigger and up to 6 other buttons can be assigned as mouse buttons or gamepad buttons (1 to 8). Once selected, the APPLY CHANGES button must be clicked.

General Troubleshooting: Clicking on the "SHOW DATA" tab causes various information to be continously read from the device, including X and Y location.

Displaying Calibration Errors: Any calibration errors are displayed as text either in the "Display Data" tab screen or the "Sensor View" tab screen.

All configuration settings are stored permanently in flash ROM.

Below is a description of the controls:

This is used to select the device being accessed, from one to four.

This button has the same effect as holding the trigger for 5 seconds. It initialtes the calibration process.

This must be clicked to apply any changes made in the above settings.

These drop-downs allow configuration of the trigger and other connected buttons. Each can be assigned as a mouse left or right button, or a gamepad button. Every button has two possible assignments, an on-screen and off-screen setting. Off-screen would normally be used for "off-screen reload".

Each button has an "Enable Cal" check box which, when checked, allows this button to initiate calibration when held down.

This setting controls the "brightness" of the internal IR sensor.Normally this can be left alone because the gain is automatically set,but you can disable automatic gain control by checking the Disable checkbox.

When automatic gain control is disabled, you can set the gain to one of 5 values with the slider. There are very few situations where you may need to do this, but one such configuration might be where the LED PCB is located behind a tinted glass screen. In this case the gain might need to be increased.

If the Disable checkbox is checked, the slider still functions but will be over-ridden during use. In auto mode the slider moves on its own.

This slider defines how long the trigger (or other buttons with "Enable Cal" checked needs to be held to start the calibration process.

These 3 check boxes define the way the gun responds to being tilted left/right.

OFF:This setting disables all tilt functionality. This means the cursor will move when the gun is tilted. This should be used only for "air mouse" or other uncalibrated applications. It gives the smoothest cursor movement but is not accurate to "line of sight". It might also be useful in gun applications which have a visible "cross-hair" target which does not require any visual aim of the gun.

INTELLIGENT:This setting compensates for tilt by averaging and then applying the compensation when it decides is the best moment to do so. This means the cursor may temporarily lose accuracy when the gun is tilted left/right but in normal gaming use this is not an issue.

CONTINUOUS:This setting causes tilt compensation to be constantly applied. This may result in a slightly choppier cursor than the above two settings.This is not an issue when the cursor is not visible, which is in most gaming situations.

Regardless of the above, the gun will not function reliably if excessively tilted left/right. 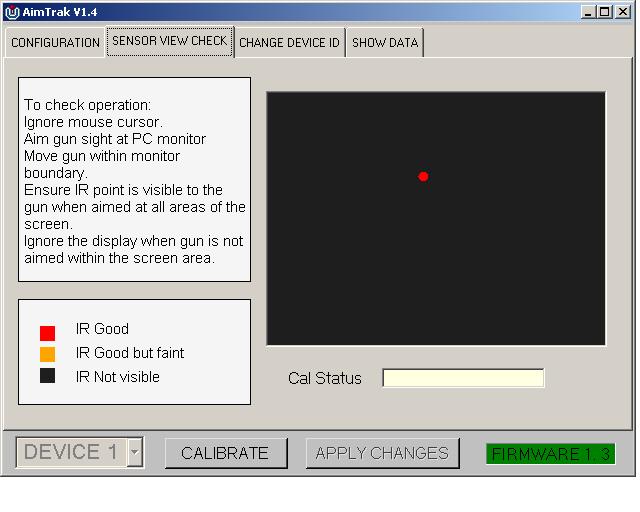 This display shows the Infra-Red LED as seen by the sensor. Note that this shows the raw uncalibrated display so will not correspond to cursor location on the screen.

This screen is used to check if the LED bar is in a location which can always be seen by the gun, in all aiming directions.

This display can be used to determine why calibration is failing. You can start the calibration process from this window. When you aim at the flashing cursor each time, check the display as well. If the red dot is not visible, calibration will fail. You can move the gun slightly to find which direction the error lies.

Failure to calibrate is usually caused by either being too close, or an obscured or faint LED signal. This display will help to identify the problem.

On this window you can change the ID of the device to one, two, three or four. This is required to be done if you have more than one device connected. After the device is re-assigned, it will "disappear" from the PC for a few seconds and re-appear as a new device with its new ID.

This tab is also used to upgrade firmware.

This section displays data read from the device such as X, Y location, This is used for troubleshooting and support purposes.

This section also contains a display of any errors encountered during a calibration process.

This section displays various unchanging data which is data stored as a result of running a calibration process. It is refreshed every 5 seconds but should not normally change after the initial read or calibration.

All the other settings are also read from the device every 5 seconds.